We need Jesus to celebrate #Canada150 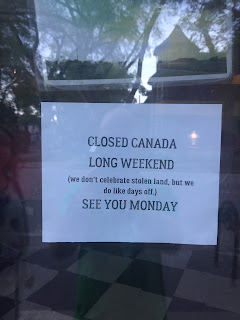 As some may know, the one hundred and fiftieth anniversary has stirred up a lot of things in our nation.

At the risk of being overly simplistic, amongst those who are more thoughtful, there are two extremes. There are those who see ‘Canada’s Birthday’ as a chance to celebrate the many privileges and blessings that we enjoy in this country, and even express a bit of national pride. On the other end of the spectrum, there are those who feel as though celebrating Canada’s birthday is akin to celebrating Hitler’s tenure as dictator of Germany. And of course, the majority of introspective people fall between these two extremes. Then, I must also briefly mention a third group, who have spent barely 30 seconds thinking about these issues, and are just happy to have an extra day off. Maybe I am most jealous of the last group; I’m certain they sleep better than I do.

I was, and to a certain extent still am, not sure how to react to this birthday. On the one hand, when I look at the struggles of many nations in the world, I see much to be thankful for and to celebrate; yet I cannot deny that there is likely a direct link between the wealth and ease of Canadian life, and fact that it cost so little for our forefathers to take this land. That is, in the normal course of things, taking someone else’s land would deplete the occupying force’s resources and man power. However, in the case of Canada, there was a confusing mix of military superiority, along with a lot of deception, betrayal, and abuse. When wealth is acquired honestly, it grows slowly and steadily, through wisdom and hard work; with a few exceptions. Where wealth is acquired quickly, there is often a party that has been wronged.

Therefore, one could argue, by simply enjoying the blessing we enjoy, we are part of the problem.

So the question is, how do you respond to this dilemma: being blessed through past wrongs?

The only answer is that you repent and believe the Gospel of Jesus Christ.

See, the Gospel says that we are wretched people. We are selfish sinners, and we deserve eternal judgement. That is the penalty for being perpetrators of the injustices against the first nations people, or being complicit in those atrocities by blindly enjoying the benefits of them. The Gospel says that the cost for those sins is nothing less than the death of the infinitely valuable life of God. That the first nations people are God’s Creation, created in His image, and when they are wronged, God’s image is slighted and maligned.

But we receive Christ’s death offered for us in our place. He died the death I should have died for my sins. So now, I no longer live under those sins. To continue to walk around with my head down, moping around, paying a kind of penance for those sins, is to say, ‘Christ’s death was not enough for me’. So is trying to pay penance by haranguing people who are celebrating Canada day, or being overly politically correct. I can now celebrate the blessings that I have been given in this country, even without celebrating the way that I received them. I have to be able to. The Christian should be used to celebrating this sort of thing.

For example, I have someone close to me who is very generous. He gives generous gifts, he is loyal to family members who are struggling, he is long-suffering. Now, I don’t know his heart, but there is much evidence to suggest that a large part of his motive in doing these things is to declare himself a good person with no need of God, no need of Christ. That is blasphemous self-righteousness, and it is a lie. So what do I do then? Do I spurn all of his kindness and generosity? No! I commend it. I commend it because even though there are likely sinister motives behind it, they are still good things. Then, when given the opportunity, I will encourage this person to repent and believe the Gospel.

So we as Canadians must celebrate our streets which can be traversed in the night without fear, the medical care we and our loved ones can attain without question, our ability to make more money than we need to survive, and on and on down the list. These are good gifts that we do not deserve.

And, when we are confronted with the continued struggles of the first nations people, we do not respond with a, ‘well, if they would just get their act together,’ kind of attitude. We remember that the entire basis of our identity is a God who looked down and saw how helpless and hostile we were, and had mercy on us. So we fight that tendency to see ourselves as better, or more deserving, and we look for opportunities to use the position we have been given in Christ to serve the first nations people. We do that to all people.

I know that i have not answered one crucial question. I don’t know that I can do it here, or that I even have an answer for it.

If I stole someone’s truck, then some years later, find that I was wrong and repent and say sorry, what now is my obligation to that person as an act of restitution? Maybe he lost his job because he didn’t have a truck and couldn’t afford a new one. Maybe his wife got sick and died, and he couldn’t pay for her medical care, in part, because I stole his truck. What does it look like to make restitution for my sin of stealing his truck?

I think you know where I am going with that illustration. What does it look like to make restitution?

I think it will look different for everyone, and that we do need to be willing to make sacrifices for the sake of restitution. Sacrifices of time and money. but I know that for everyone it will start with the Gospel. We cannot simply force people to live under guilt and shame. The repentant tax collector in Matthew gives his money away with joy. That is what the Gospel produces: restitution with joy. Guilt is a horrible motive for change and healing. Lasting healing will come  through the believing and preaching of the Gospel.

So if you got nothing else: preach the Gospel, not unquenchable guilt and shame.